Thank you for visiting The Affirmation Spot. Your comments on the blog or this article are always welcome. What do you think? Please click here to comment on today’s blog.

My World Affirmations – our first “album” ($2 off introductory special)

My World Affirmations are 11 powerfully worded affirmations set to inspiring music. They are designed to bolster your confidence and commitment to developing the attributes for a better life. I personally listen to these affirmations nearly every morning. You cannot help but feel better about life and about the world when you are done.

For the first time, The Affirmation Spot is offering these affirmations as a single download – an “album” – at huge discount over individual downloads. Click to learn more and hear samples. 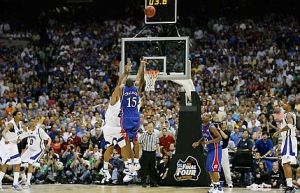 What makes sports so compelling for so many people is that it mirrors the drama of life. Last night’s Mens’ NCAA National Baskeball Championship Game was just such a drama. With all the symmetry and irony of a greek tragedy, the Kansas Jayhawks captured their third national title.

The game featured an array of future NBA stars who no doubt will battle many more times over the coming years at the pro level. In the end, it would be decided by the team willing and able to face its own worst demons. For KU, who would take the big shot when it counted? For Memphis, would free throws finally be their undoing?

The game featured two teams trying to prove they belonged among the elite. The Jayhawks trying exorcise the ghosts of tournaments past and Memphis trying to earn the respect granted to BCS conference winners.

The game went back and forth for most of the evening. Memphis took an early 9-3 lead, but Kansas stormed back and held a five point lead at halftime 33-28.

The first 10 minutes of the second half see-sawed back and forth, but then Memphis freshman phenom Derek Rose took over. Rose poured in 11 points over a 2 minute span to help Memphis extend its lead to nine points.

The clock read 2:12 to play and the score read Memphis 61 Kansas 52. A lifetime memory was about to be created for one team and for all the world it looked like it would be Memphis. History was preparing to crown the Tigers national champions.

But over in the KU huddle, 15 people dressed in the road blue uniforms had not given up. Great moments are only possible when people refuse to give up. The Jayhawks were not giving up. They were not planning concession speeches. They were plotting a comeback.

Over the next 2:02 Kansas whittled away making several key shots and forcing Memphis to face its arch nemisis – the free throw line. Despite all its success this year, Memphis entered the NCAA tournament third to last in the country in free throw shooting. It had been talked about throughout the tournament as a possible Achilles heel, but the Tigers had overcome their weakness and made it a strength.

However, with the eyes of the nation now watching, the Tigers missed four of five free throws down the stretch and that opened the door for Jayhawk history.

Meanwhile, Kansas had an answer for its demon -who would take the big shot – and his name was Mario Chalmers.

KU inbounded the ball with 10.8 seconds remaining and trailing 63-60. Guard Sherron Collins worked up the right side of the court and found teammate Mario Chalmers. Moving to his left beyond the three-point line, Chalmers turned, planted, and launched a 20-foot jump shot for the ages. The shot sailed through the basket with a sweet swish.

The game was tied and headed to overtime, but the game was over. The momentum of destiny was now comfortably perched on the Jayhawks’ shoulders as they completed the 75-68 victory with a dominating overtime period.

All very nice, you say, but it’s just a game. It’s a game, but it’s life too. We often find ourselves down nine with time running out. When we do we are faced with a choice. A choice to put ourselves on the line and try or simply concede that circumstances have beaten us.

Not every effort is rewarded with victory. Not every comeback is glorious or successful. Yet this is sure. Every great moment is created by someone’s refusal to give up.

Michael Jordan once said, “I’ve missed more than 9000 shots in my career. I’ve lost almost 300 games. 26 times, I’ve been trusted to take the game winning shot and missed. I’ve failed over and over and over again in my life. And that is why I succeed.”

Today’s featured affirmation is:“I am a great basketball player and getting better and better each and every day.”Hear an audio mp3 version of this affirmation right now.

Who is your final four in the Mens’ NCAA Basketball tournament? Leave your comment below.

Here’s one for the basketball fans. March Madness is upon us. As University of Kansas graduate, I’m a bit bias.However, I’m curious:

Which teams deserve the four #1 seeds in the upcoming Mens’ NCAA Basketball Tournament?

Here are the choices. However, feel free to add your own. Leave your comment to vote on your four teams.

Going into tournament weekend, which teams are your top seeds?

Be peaceful Be prosperous!

Spread the word about this blog entry:

Add me as a friend:

Link to this blog entry:
The tracback url for this blog is: https://theaffirmationspot.wordpress.com/2008/03/15/ncaa-mens-basketball-top-seeds-the-affirmation-spot-for-saturday-march-15-2008/

Just wanted to update you on the current results from our affirmation poll. I am conducting this poll as part of the research I am doing for a book I am writing about affirmations. The survey currently consists of 10 questions.

Here are some of the interesting results thus far. Click the link below to take The Affirmation Survey.

If you use affirmations or other motivational products on a regular basis, which of the following best describe when and how you use them? Select all that apply.

What format(s) do you usually use to get your affirmations or other motivation? Select all that apply.

Which areas of your life have you used or would you consider using affirmations to improve? Select all that apply.

Welcome to The Affirmation Spot. If this is your first time to the site, be sure to click one of the subscription options (top left) to be notified each time the blog is updated. Thank you for visiting. If you enjoy what you read here, help us spread the word about The Affirmation Spot.

Click here to select from more than 70 mp3 affirmations for immediate download. You can view our entire affirmation catalog at The Affirmation Spot.com

“My dreams, however big I make them, belong to me. No force on earth can keep me from achieving them.”

I was looking for an inspirational story for the Christmas Day post and I found one closer to home than I expected. Dreams and pursuing them are a frequent topic on this blog. Belief and confidence are powerful companions when pursuing dreams, but they are empty without action.

Sometimes we need a reminder, even from an eleven-year-old, that the best way to catch a dream is to stop talking and do something about it. The eleven year old, in this case, is my nephew, Dakota Zinn. He has a dream and he is taking action on it.

How about you? The new year is coming. What are your dreams for the new year? Are you willing to take action on yours the way Dakota has.

The following article and photo are copyright The Lawrence Journal-World. Article by Kristi Johnson and photo by Nick Krug.

Dakota Zinn, 11, of Lawrence, is a fan of the Topeka RoadRunners hockey team and is so inspired by the sport that he is working to try to get a ice rink built in Lawrence.

What’s a boy to do when he wants to play hockey in Lawrence?He could go to Overland Park, where Kansas University’s ice hockey club plays. Or, if the weather would stay cold enough, long enough, he could play on a frozen pond.But, if he’s like 11-year-old Dakota Zinn, he might try to get an arena built here in town. Dakota, a sixth-grader at Langston Hughes School, envisions an ice arena where youths and adults could play ice hockey and where KU’s hockey team could play. He also would want to offer open skating hours for the community and facilities for parties.And Dakota’s adamant on one point: No alcohol allowed. He has seen fans act up at Topeka RoadRunners hockey games and he wouldn’t want to see the same at his arena.“I’d rather be safe than have people there being crazy,” Dakota said.And just because Dakota is 11, don’t let that fool you. He’s taking this idea seriously.“He’s making business cards and he’s making T-shirts for all his friends,” Dakota’s dad, Rod Zinn, said. “He’s already got businesses calling him up.”Dakota thinks his age actually helps him. When adults pitch an idea, he said, it’s easy to ignore them. But when a kid has an idea, he said people take notice.

Dakota’s plan to build the Extreme Ice arena has become a family affair. He has drawn up building plans with the help of his dad, who works for Landplan Engineering. Dakota also has written surveys and fliers to get the word out. Some of the help there has come from his mom.

“We’re behind him and we’re along for the ride,” Rod Zinn said.

Dakota and his dad estimate that the arena would cost about $3 million, a cost the family’s not planning to cover alone. So Dakota also has been working to attract donors. He has even worked out different tiers for donors. For instance, a donation between $1 and $50 would get a donor a free puck signed by a hockey player.

Dakota’s dream of an ice arena has consumed much of his time the past few weeks, Zinn said. He said Dakota was sick last week, which he attributed to late nights spent working on ice arena plans.

Dakota became a fan of hockey only recently, and he doesn’t even play the sport yet. He has played other sports, such as football and baseball. But he got hooked on hockey when his dad got tickets for the Topeka RoadRunners’ home opener in September.

They had so much fun that his dad wrote a letter to the team’s owner, Mary Magdalene Lorang. She was so touched by the letter, Zinn said, that she gave his family season tickets.

And now, Dakota wants to play hockey. But he doesn’t want to leave town to do so.

He thinks having an ice arena or some other youth sports center in town is essential to attracting families with children.

“I think it’s going to become a city for older people to retire unless we get more stuff for kids,” Dakota said.

Be peaceful Be prosperous

The tracback url for this blog is: https://theaffirmationspot.wordpress.com/2007/12/25/a-little-christmas-inspiration-the-affirmation-spot-for-christmas-day-2007/