(Clarification: Thanks to a reader of the blog. Tata Motors of India is producing these cars under license from MDI – a French company. Here is a website with great information about alternative fuel vehicles) 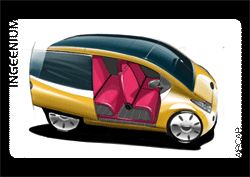 There is hope in our struggle with $4 + per gallon gas prices. However, it is not coming from Washington or Detroit. No, it’s not even coming from Tokyo. India is claiming this advance.

While the US Congress, oil companies, and the automakers argue about whether US consumers can expect fuel efficient, Alternative Cars in the Twenty-First Century

, others are seizing the moment and showing the way.

According to an article on the Popular Mechanics website, the CityCat – one of the new AirCars – will sell for about $12,700 US, has a range of 125 miles, a top speed of 68 mph, and zero fuel emissions.

CityCat can be refueled at pressurized air stations located at existing gas stations. The cost of a fill-up is about $2 US. The car can also refuel by plugging into the electrical grid and using its onboard air compressor.

Not everyone is sold yet. There are concerns about safety, range, and affordability. Many Americans would find the cars a departure from their aesthetic preferences. Nontheless, MDI has already signed deals with 12 other nations for the design including Germany, Israel, and South Africa.

These advances around the world beg the question. Is American losing its edge? While we debate issues from the era of Henry Ford and John D. Rockefeller, other nations and companies are looking at the global situation and making lemonade.

New Thomas Edisons are demonstrating the kind of ingenuity and innovation that put America on top a century ago.

Take a look at the future. It may not be the destination, but at least it starts us down the road.

www.theaffirmationspot.com offers downloadable mp3 affirmations for nearly every area of life – sports, sales, wealth and prosperity, health and fitness – to name just a few. Our library is growing all the time. Remember your fifth affirmation on each order is always free.