Thought of the Day
“You are the leaven which binds together the entire fabric of our national system of defense. From your ranks come the great captains who hold the nation’s destiny in their hands the moment the war tocsin sounds. The Long Gray Line has never failed us. Were you to do so, a million ghosts in olive drab, in brown khaki, in blue and gray, would rise from their white crosses thundering those magic words: Duty, Honor, Country.This does not mean that you are war mongers. On the contrary, the soldier, above all other people, prays for peace, for he must suffer and bear the deepest wounds and scars of war.”

Memorial Day. In The United States, it is the day we set aside to honor those who lost their lives previous wars and to honor those risking their lives today. This is as it should be. When people are willing to put themselves on the line for the good of others – in military service or other endeavors – we have an obligation to respect that.

To all veterans, THANK YOU for your service! I hope all Americans will spend a few moments today contemplating the very real sacrifices these people have made for all of us.

WE THE PEOPLE owe our service members and veterans more than their support in wartime and even more than their honor in death. We owe it to them to compel our leaders to put their lives at risk only when it is necessary and hold them accountable when they don’t. We owe them our commitment not allow their lives to be needlessly risked.

Going back to the mid 1960s, WE THE PEOPLE have been derelict in our duty.

MacArthur makes an important point here. He is speaking to West Point cadets. He reminds them that they must be ready when called to defend the country. However, he places a caveat on that. He declares that soldiers above all are not war mongers and pray for peace.

The first few lines to the preamble of the Constitution read:

“WE THE PEOPLE of the United States, in Order to form a more perfect Union, establish Justice, insure domestic Tranquility, provide for the common defense, promote the general Welfare, and secure the Blessings of Liberty to ourselves and our Posterity, do ordain and establish this Constitution for the United States of America.”

WE THE PEOPLE and the Constitution are very important to the calculations of war and peace.

While there are times, when war is unfortunately unavoidable at the current level of human development, it is necessary far less often than it is proposed as “the only solution” by our leaders. The honest truth is that most wars can be avoided if WE THE PEOPLE hold leaders accountable to us and to the Constitution before, during, and after the decision to fight them. 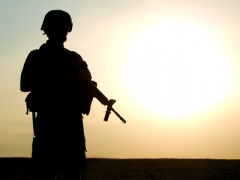 The soldiers of the past that we remember and the soldiers of the present who we cannot forget rely on us – you and me – to make sure that when they are sent into battle it is truly to defend our country. You see, they are bound to follow the orders of the Commander-in-Chief. They count on us to be a check and a balance to that person’s judgment that war is necessary. WE THE PEOPLE are responsible for holding our leaders in check FOR our troops.

Remember the President of the United States is the Commander-in-Chief of the armed forces not WE THE PEOPLE. The President is our servant not our boss.

I’ve heard so many journalists, especially before the current war, say something to the effect that “We must support our Commander-in-Chief.”

The Founding Fathers would have scoffed at such nonsense. They endowed WE THE PEOPLE and the people’s representatives in Congress with all kinds of tools to prevent this “Commander-in-Chief” syndrome from taking root or thriving.

Examples include Congressional Funding of wars, states raising troops, Congressional declaration of war, impeachment, regular elections. WE THE PEOPLE and the Congress, have unwisely and unconstitutionally ceded these powers to the Commander-in-Chief.

When this power rests in the hands of one person who may not be questioned we might as well call the president Caesar because that is a title worthy of such unwarranted power.

War, it turns out, often benefits the elite who start them, but only rarely benefits the average citizen who must fight them. Leaders make a name for themselves by engaging in war.

Let’s do a little test. Grover Cleveland, Chester Arthur, or Howard Taft. How many Americans don’t even know the names? How many who do know the names could tell you anything about their presidencies?

Franklin Roosevelt, Abraham Lincoln, Woodrow Wilson, Harry Truman, Teddy Roosevelt, Dwight Eisenhower; most Americans readily recognize their names. They were either war presidents or came to prominence through their participation in a war.

War makes presidents historically noteworthy. They say the first thing lost in war is the truth. That’s because many wars are started by mistruths that play on the fears, greed, or prejudices of the population. WE THE PEOPLE must become more wise and less easily manipulated. WE THE PEOPLE must demand better evidence before our troops go into harm’s way.

For it is our sons, our daughters, our brothers, and fathers, and mothers who will be memorialized on future Memorial Days. Let us make sure that we only permit that sacrifice for the right reasons.

WE THE PEOPLE owe it to the troops in the field today, those who have sacrificed in the past, and those who will be asked to do so in the future to make our leaders accountable. Congress must re-establish its Constitutional authority in matters of war. The people must think logically and not allow themselves to become the victims of their own emotions.

Today politicians who currently hold high office and those seeking high office will offer solemn and respectful speeches for the fallen.

What WE THE PEOPLE need from our leaders is not speeches in front of white crosses or banks of flags.

What WE THE PEOPLE need, indeed demand, from our leaders is more than feigned soberness about putting young men and women on the battlefield.

What WE THE PEOPLE need from our leaders is not heroic speeches one day a year, but a commitment to taking care of veterans when they come home.

What WE THE PEOPLE need from our leaders is not stirring rhetoric, but leadership that owns up to the government’s responsibility for soldiers exposed to Agent Orange, the still unknown causes of Gulf War Syndrome, and this war’s version depleted uranium. Instead, we have been given 30+ years (starting with Agent Orange) of denial and calling the people who made these sacrifices the politicians give speeches about “crazy” for claiming that their exposure to a proven weapons grade pesticide might have impaired their bodies.

An empowered WE THE PEOPLE must be prepared to question our leaders at every turn, demand answers at every opportunity, and punish leaders when they abuse their solemn duty to prevent war.

WE THE PEOPLE must not be cheerleaders for war, but guardians against its unwarranted use. War is a disease that humans have lived with throughout time. In fact, its longevity and it ubquitousness are used as excuses for not stopping it by many. You’ve heard it – the “We’ve always had war and we always will” mentality.

The suffering war causes the soldiers and the victims is horrific and inhumane in the most ideal of situations. WE THE PEOPLE should view war like a hideous plague among us. We worry about bird flu and other calamities that may never befall us and over which we have little control. While WE THE PEOPLE allow the scourge of war – something that is happening and over which we have ultimate control – to go on.

WE THE PEOPLE need to support and extoll the value of the peacemakers as well as the warriors. Jesus said, “Blessed are the peacemakers.” Buddha added, “Few know that our purpose in this world is to live in harmony. Those who become aware of this cease their quarrels immediately.”

WE THE PEOPLE need to demand that our leaders be peacemakers first and warmakers a distant, distant second.

WE THE PEOPLE may have to celebrate a day in memory of the fallen for some time to come, but if we live up to our other responsibility, we can at least do so with a clearer conscience that we did all we could to prevent and minimize the need for our solidiers and their families to sacrifice so much.

WE THE PEOPLE need to take General MacArthur’s words into accout and be the defenders of our troops just as they are our defenders. For today is not only a time for memory of the fallen, but of how WE THE PEOPLE have failed them.