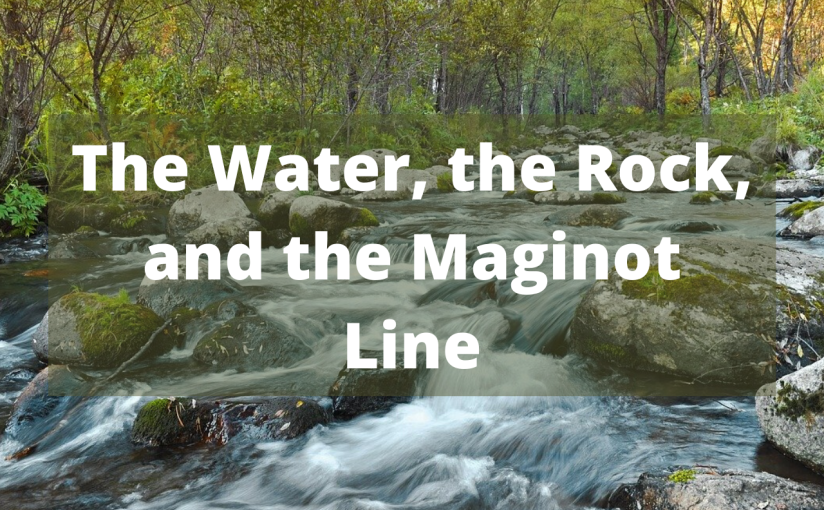 After World War I, France built a massive line of fixed fortified concrete bunkers and walls. It was called the Maginot Line and it’s gone down as one of history’s great blunders. The goal was to prevent future invasions by Germany like the one in 1914.

The problem was the French were fighting the previous war and the Germans were preparing themselves to fight the next one. In a World War I framework, an adversary would have been crazy to conduct a frontal assault against the Maginot Line.

By 1940, when the Germans quickly overran France, the Germans simply flew their planes over it and drove their tanks around it. The massive fortification did nothing to defend France and their reliance upon it caused them not to otherwise prepare.

The stark imagery of this example has gone down in history as a metaphor of stolid, dogmatic thinking in the face of change.

Wisdom is adaptation to the moment. Fixed thinking, like the Maginot Line, is not up to facing new challenges.

A similar metaphor is that of the a rock and water. A rock is solid, strong, immovable. Water is soft and pliant. It goes over and around the rock. Watched for a day or a week, the rock appears to be winning the battle. It’s holding its ground and standing firm. However, come back in a year or five or fifty. Over time, the water will wear the rock into nothing.

New challenges require us to be agile and adaptive. We live in a world, especially now, that is not only experiencing massive change in this moment, but is nearing the birth of a very different world where many old paradigms are going to be tested.

If we don’t adapt, we can look forward to the fate of the rock and the Maginot Line.

If we work to understand the difference between immutable principles and merely habitual thinking, a very important distinction, we will find ways to navigate and thrive in this new world.

Better days are ahead for humanity, if we’re smart, flexible, and principled.

My grandmother lived from 1904 to 1988. When she was five, her family got into a horse-drawn wagon and rode outside of town to observe the 1910 passing of Halley’s Comet. When she was 64, she witnessed a man walking on the moon.

Wagon thinking would never have gotten us to the moon in six decades. New thinking was required.

It’s very likely that in two or three decades our world will be more advanced and changed relative to today than 1969 was to 1910.

That kind of change holds both peril and opportunity. Who will we be? Will our technology run us or will we use our technology to benefit humanity in ways never before imagined? Will power and wealth be held in fewer a fewer hands or will we finally create an egalitarian society where our genius meets our basic needs and we have the freedom to explore our highest aspirations?

I don’t and I won’t let this moment get me down. We’re going through the growing pains of massive transformation. Whether it is to the benefit or detriment of most human beings is being decided, as tomorrow always is, by our thoughts, words, and actions today.

Stay safe. Stay well. Amazing things are on the way! Oh, and by the way, just in case no one else has reminded you today, you are awesome!

One thought on “The Water, the Rock, and the Maginot Line”