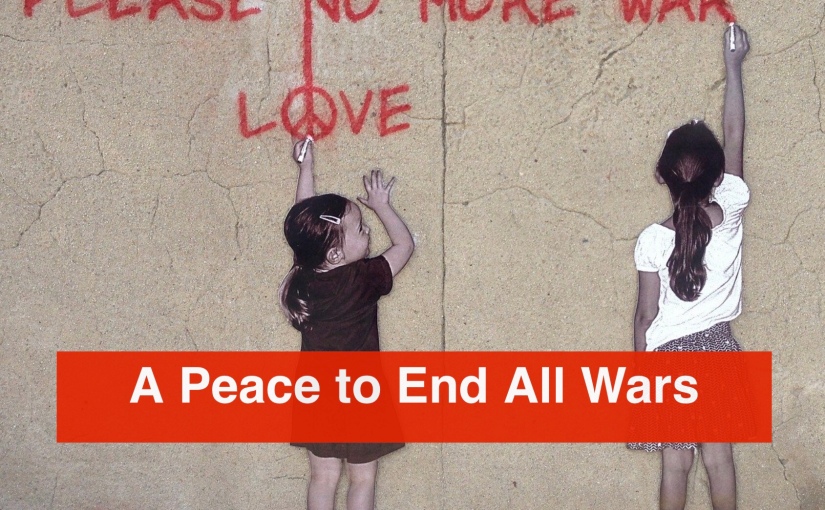 They called World War I “the war to end all wars.” This was a wrong-headed idea from the beginning. War can never and will never end war. One hundred years later our civilization still buys into the idea that conflict can end conflict. Time and again, this premise has been demonstrated to be false. Yet, we’re still at it.

The truth has forever stared us in the face. Buddha said it 2500 years ago.”For hatred never ceases by hatred. Hatred ceases by love.”

Five hundred years later Jesus counseled, “You have heard that it was said, ‘Love your neighbor and hate your enemy.’ But I tell you, love your enemies and pray for those who persecute you…”

President Kennedy made a bold and insightful statement nearly 60 years ago. Never has it been more apt than right now. “Mankind must put and end to war or war will put an end to mankind.”

We’ve talked multiple times during our journey together about the need for an empowering foundation and a nourishing environment. War, hatred, and violence are the antithesis of that environment. So, issues of war and peace are fundamental to any personal development we hope to pursue.

Our society is the result of the cumulative thinking of us all. If we have perpetual war, it’s because that’s the mindset that dominates our consciousness as a whole.

Understanding the beneficial nature of peace to our own development, it behooves us to break the conditioning and become tireless advocates for peace and the changed mindsets that can support it.

A peaceful world is more than a nice aspiration. It’s now a prerequisite for human survival and our next steps out into the galaxy. Let us all strive to create a peace to end all wars because that’s all that ever will.

In case no one else reminded you today, you’re awesome!

I am the Founder of The Affirmation Spot, author of Annuanki Awakening, and co-founder of 6 Sense Media. My latest books are the Anunnaki Awakening: Revelation (Book 1 of a trilogy) and The Power to Be You: 417 Daily Thoughts and Affirmations for Empowerment. I have written prolifically on the topics of personal development and human potential for many years. By day, I write sales training for Fortune 100 company. I began studying affirmations and positive thinking after a life-threatening illness at 25. My thirst for self-improvement led him to read the writings of Joseph Campbell, Wayne Dyer, Deepak Chopra, Neale Donald Walsch, and many other luminaries in the fields of mythology and motivation. Over time, I have melded these ideas into my own philosophy on self-development. I have written, recorded, and used affirmations and other tools throughout that time to improve my own life and I have a passion for helping other reach for their goals and dreams. Ray holds a Bachelor's of Science Degree in Secondary Education in Social Studies from University of Kansas. He lives in Framingham, MA with his wife and his black lab, Mia. View all posts by Ray Davis - The Affirmation Spot