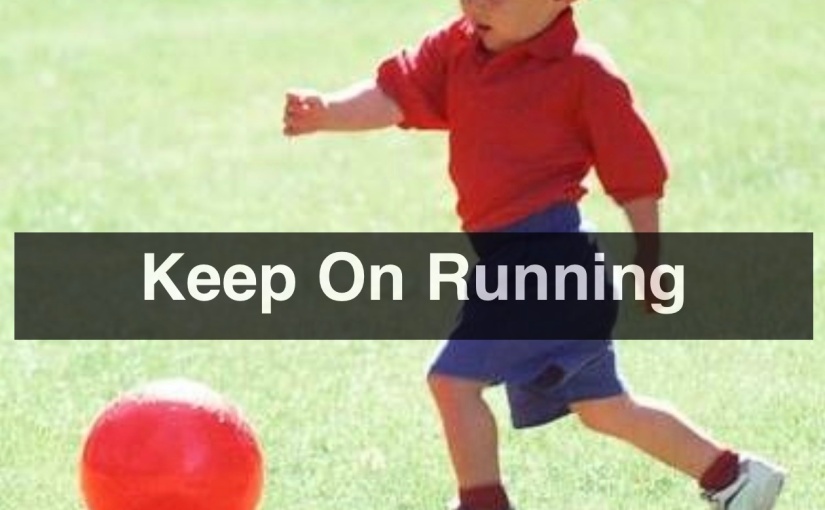 A diiferent form of this post originally appeared on this blog in March 2009.

Saturday was beautiful Spring-like day in the Kansas City area. I took my beautiful black lab Mia for a walk. We live next door the elementary school here and between the school and us is a baseball field.

There was a kickball game going on as we passed by. I paused to watch for a few minutes. It was a mix of adults, little kids, and littler kids – probably a family get-together of some kind.

As Mia and I stood there, one of the smallest kids stepped up the plate. The pitcher rolled the ball and the little boy kicked with all his might. The ball dribbled slowly toward tbe third base. The little boy was chugging down the to first base for all he was worth.

The third baseman fielded the ball and tried to hit the little boy with it to get him out. The ball missed and rolled behind first base.

Another fielder threw the ball trying to get the little boy out at second, but missed again. The ball rolled away from the fielder. Now people were yelling a mix of, “Run, run, run” and ”Stop, stop, stop.”

The comedy of fielding errors continued and the little boy, no longer listening to the mixed shouts coming from the crowd, forced the issue by rounding third and heading for home.

The ball arrived to the catcher too late and the little boy dove into home plate head first and scored.

I took this as a metaphor. The little boy, through all the chaos and the advice from the divided experts, just kept on running. He wasn’t really paying attention to what the fielders were doing with the ball. He seemed to be locked in on one idea – scoring that run. He kept on running!

How often, as you try to achieve your goals in life, do you have people telling you, “Do this” or “Don’t do that?” Do you let it stop you and knock you off course or do you keep on running? It’s easy to get stalled listening to the experts or worrying what “the fielders are doing with the ball.”

Take it from this little boy. Ignore the chaos and stay focused! Keep moving toward your dreams. I’m not saying experts can’t be helpful and I’m not saying ignore other aspects of your life. I am saying that when you have a goal or a dream your job is to keep on running.

If you do, you’ll be sliding into home plate with a big score as well!

In case no one else reminded you today, you’re AWESOME!