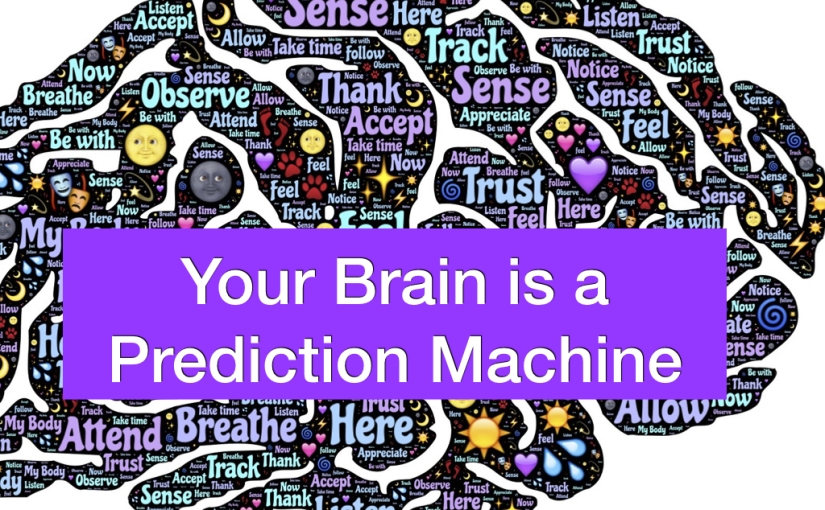 I came across this fascinating TedTalk video by Professor Anil Seth of Sussex University in the UK. The talk is about consciousness and I very much encourage you to watch the entire video.

Though I fundamentally disagree with his definition and proposed origin of consciousness, I find his description on how consciousness functions within living beings highly instructive. I believe it’s information you can make use to shift your patterns and your mindsets.

Please go to the 4:30 mark in the video and watch it through 14:13 (sorry you know how copyright is these days and TedTalk is not very charitable on these matters.) I’ll comment on the video below.

When Professor Seth discusses outer perception, he shares that the world is not just out there happening to you. It’s actually a function of the brain receiving signals (never directly perceiving this reality) and interpreting them. After a lifetime of interpreting these signals to mean certain things, something amazing happens. Your brain becomes a prediction machine.

Literally, your brain becomes interactive in this process and predicts what you’re about to experience or what you are experiencing. It begs the question as to whether the brain even waits for the signals or just fills in the blanks with assumptions and past experiences? You and I have both had those experiences of feeling like you’re on auto-pilot.

Though far more complex, you can think of it this way. Your brain perceives reality much the same way an algorithm in a weather prediction model predicts weather. It doesn’t need to see the weather. It just needs a vast series of data points about previous weather situations and it can very accurately predict what will happen. This is what our brain is doing all day long only on a much more sophisticated level.

Implication: Your brain is part of an automatic feedback loop that perceives reality through neural impulses and eventually gets so good at it that it can predict what’s next without the impulse. Think about this. When you’re walking do you consciously have to wait for your raised foot to touch the ground again? Do you even need to think about it? No. Your brain has experienced that action so many times that it’s predicting there’s going to be a floor there to catch the foot.

Think about how much of this process can and absolutely does become automatic. You think you’re perceiving the reality of a situation at work or in politics or in world, but often you’re not. Your weather pattern algorithm is subconsciously saying, “Ah, that’s a thunderstorm. Oh, when this set of variables come together, that means the temperature is going to be about 68 degrees.”

This is why affirmations and meditation and other consciousness tools we’ve been discussing are so important. You must get conscious of this process and make it conscious again or you’re simply a computer responding to habitual inputs.

Now think about the funny dog video in the clip. That was a computer program designed to simulate the way human perception biases what you see. It was exaggerated to make a point, but you’ve probably had the experience of buying a new car and suddenly seeing it at every stop light.

What happens when the media and social media are all abuzz about terrorism or recession or climate change. If you’re not conscious, you’re going to begin seeing evidence for these things everywhere like the dogs in the video. After enough immersion time, you won’t even recognize this is a distortion of reality. It becomes part of agreed upon reality.

You can also see the psychology of this in your personal development. If you constantly have the thought, “I suck” or “life sucks” your brain is going to start predicting that’s the world you encounter and it literally makes it so. That’s why like attracts like.

I  could take much deeper than I have time or you have patience for in this post.

Let’s quickly cover your sense of self. Your well-being, or lack thereof, is also sent to the brain as electrical impulses from all over your body. Each cell is reporting. Deepak Chopra has been talking about this in depth for decades.

Your brain isn’t down checking on your heart or your sore knee. Electrical impulses are traveling to the brain with those reports. Your brain simply scans the reports and gives you the experience.

Again, this can become an unconscious cycle. Your brain keeps getting the message you don’t feel well, it predicts you don’t feel well, and you don’t feel well. I’m not saying, or at least we’re not advanced enough in this understanding to say, that sickness isn’t real and you shouldn’t follow traditional or non-traditional means of healing. I’m only pointing out that, like the outside world, your internal perception can become a self-fulfilling prophecy in a brain designed to predict what’s next and provide that experience.

What do you do?

Wow! This is big stuff and profound. Even getting it intellectually doesn’t get you to a point of being able to use it, but it’s a start.

Here are the implications

This, my friends, is science explaining how and why tools like meditation and affirmations work and why you need them in the first place.

There is a “next level” to all of this. It’s a hypothesis called Conscious Realism that uses the mathematics in the Theory of Evolution to question its biggest assumptions.

See you then! Thank you so much for staying with me on this drive to 365!