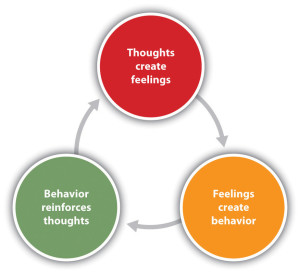 Though this idea that thoughts become things has been articulated many times, this particular formulation comes from Mike Dooley, best-selling author and founder of Notes from the Universe.

This seems like a simple enough fact. So, why am I posting it on a week when we’re delving into topics about the unknown?

First, let’s deal with the readily apparent but not often discussed fact that literally every THING around you began with a THOUGHT. Heck, most creation stories even say the universe was created with thoughts or words. Consider the implications. Thinking LITERALLY manifests the world around us. How profound is that?

Guess what? We’re all thinkers and we all have that power onboard. So, why didn’t school or Sunday school or the wider culture make you aware of that from an early age? Sadly and frankly, you are easier to control when you feel powerless and weak than if you know you have an innate ability to create the world around you.

You live in a manifest world of structure and things. However, that can only rightly be said to emerge from a world of formlessness and thinglessness. How do thoughts cross that threshold and how do they become not only things but POWERFUL things?

Thoughts are energy, but they remain neutral energy until action occurs. Action is the mechanism that helps thoughts cross into the physical world. However, that’s not enough to make a big impact. Emotion is the magnifier. It takes the energy of a thought and sends it like a ripple out into the world. These ripples, sent out consistently and with purpose, solidify into things.

Do you remember that idea you had for a cool invention, but you never acted? Then sometime later you saw a commercial for your idea as a product? You had a thought. Maybe you even took some action. However, it was not consistent and sustained enough for it to become a thing. Meanwhile, someone else had that thought, put it into action, and pushed it forward with emotion until it emerged as a thing.

In very basic terms, this is how your thoughts become things. They can be “good” things, “bad” things, or neutral things. The key is they all begin with a thought, are put into motion by action, and are magnified with a powerful positive emotion like belief.

That is how thoughts become things. I’d love to hear your comments or experiences below.

Have an AWESOME day!

Please checkout our Quotes Library on the TAS website.