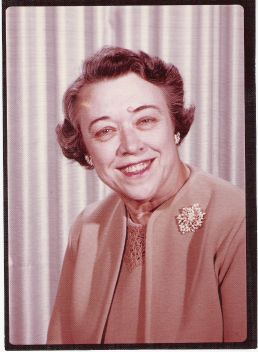 Today would have been my grandmother Davis’s 113th birthday. Juanita R. Davis – my paternal grandmother – was born Juanita Wood on December 18, 1904 in southern Illinois. Despite debilitating conditions that began very early in life, she lived life with an undeniable vigor and spunk. Because she fought through her challenges, many of us are here today.

Ever the consummate storyteller, Grandma Davis regaled me a number of times with her story of seeing Halley’s Comet in 1910. They went out into the country in wagons to see the spectacle. She was of that amazing generation that saw wagons become lunar landers and human beings walking on the moon.

Later in life she became a prolific writer and poet. She was published in numerous newspapers and regional magazines. She used to babysit my next youngest brother and I and she often hosted her Circle meetings. These were meetings of all women sharing community and their writing.

We lost her 29 years ago this October. Before she left this world she inspired me in ways she knew and in ways neither she nor I can understand. Certainly, I write because of her. All these years later, she remains one of the steady influences on my life.

As we prepare to dig in for Winter 2018, I decided to share one grandma’s many poems. It fully displays her ironic sense of humor and describes the unpredictability of the weather even in our day of weather satellites and big data.

She titled it “We Take It As It Comes”.

“We Take It As It Comes”

Ray Davis is the author of Anunnaki Awakening, founder of The Affirmation Spot, and co-founder of 6 Sense Media.

is an advocate for the potential of the human race. He’s life-long history buff and holds a B.S. in History Education. He’s always been fascinated by alternative views of history. His current latest novel is Anunnaki Awakening: Revelation s turning heads and opening minds. Order your signed copy today at AATrilogy.com.