Our society needs to be about developing better people not better laws. As long as we ignore the former, the latter will not matter. 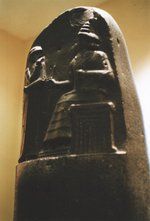 The best preserved of ancient law codes is the Code of Hammurabi created around 1760 B.C. Since then we have had the 10 Commandments, the Buddhist Noble Eightfold Path, the Magna Carta, the United States Constitution, and many other secular and religious attempts to help humans behave properly.

Even in this brief catalog of these attempts, we cover every major culture on the earth and a span of nearly 4000 years.

The fact is that we can try to reform from the outside for another 4000 years and I predict we would find humanity in the same boat. Reform must come from within. We must look at ourselves and the world with new eyes. We must commit to wanting something different, something more for ourselves, for our children, and even for others.

That’s a difficult, very adult journey and there are powerful arguments against it.

Some say that human beings simply are not capable of that kind of reform; that we are victims of a design flaw that forever condemns us to our current status. It’s our nature, they claim, and it cannot change.

Others say that these are fine academic concepts, but they do not address safety and security issues. They point out that there are dangerous people in the world and we must be protected. We must have government and laws, they argue, to protect us from criminals, terrorists, and bad people.

There is some validity to both of these arguments. The problem is we are not addressing the root causes and so we are condemning ourselves to a repeating and self-reinforcing cycle.

Do the laws protect us? Have they ever? 4000 years….have all the laws and government that have evolved solved the root problem? Since Hammurabi first enshrined his code government has been one of the great growth industries on this planet. We’ve had monarchs and despots, democratically elected governments and collective governments.

These secular systems have attempted to establish government as the arbiter between misbehaving and unreformed people. They are band-aids – an attempt to create some justice and peace in an imperfect situation.

The one thing they all share in common is that they have failed to create a happy, peaceful world full of empowered people pursuing their hearts’ content. Instead, governments have been the organizing forces behind wars over resources, religious beliefs, and for sheer domination and control. They have used their power to increase dependence upon their existence.

At least the spiritual attempts have recognized that reforming the person is the central issue in the equation. Both the 10 Commandments and the Noble Eightfold Path focus on prohibiting or encouraging types of behavior that are destructive to the person and the society.

Yet, they are still external attempts to enforce what must be an internal process. WE THE PEOPLE must choose to think and act in new ways. We must recognize that all change in the world and in our lives begins within us. No government or religious institution can substitute for our own desire to have a different world.

Am I advocating the overthrow of government and religion? No. They both still serve useful purposes at our current state of readiness for self-realization. Religion and government will never be completely obsolete, but their role will change and their control will be lessened.

Their top-down, centralized control approach is a relic of a previous era and must be replaced by a decentralized, democratic approach to life on Earth.

While many individuals are starting to realize what is possible, the overwhelming majority still live unaware of what lies within them.

I believe we are at a state where we can begin the transition away from the Age of the Institution and towards the Age of the Person. As more people begin to flower into their potential, this process will accelerate until we find our world in a place we never expected.

The world is changing and now we must change! Off with the training wheels! It’s time to see who we truly are.

Ray Davis is the Founder of The Affirmation Spot and focuses on empowering minds to think positively, achieve goals, and live dreams.

“My mind is officially blown!” “I’m loving this book. There’s only one problem. I was so into the story that I missed by bus stop.” “I need Book 2. Now!”

These are some of comments from readers about Ray’s new speculative fiction novel – Anunnaki Awakening: Revelation. This fictional novel follows White House Correspondent Maria Love on her quest to learn the truth of human origins and the Anunnaki’s role in our emergence. She discovers their intervention never stopped, but can she act quickly enough to change the destiny of two worlds? Author Graham Hancock said, “We are a species with amnesia.” Let your Awakening begin today.

I am the Founder of The Affirmation Spot, author of Annuanki Awakening, and co-founder of 6 Sense Media. My latest books are the Anunnaki Awakening: Revelation (Book 1 of a trilogy) and The Power to Be You: 417 Daily Thoughts and Affirmations for Empowerment. I have written prolifically on the topics of personal development and human potential for many years. By day, I write sales training for Fortune 100 company. I began studying affirmations and positive thinking after a life-threatening illness at 25. My thirst for self-improvement led him to read the writings of Joseph Campbell, Wayne Dyer, Deepak Chopra, Neale Donald Walsch, and many other luminaries in the fields of mythology and motivation. Over time, I have melded these ideas into my own philosophy on self-development. I have written, recorded, and used affirmations and other tools throughout that time to improve my own life and I have a passion for helping other reach for their goals and dreams. Ray holds a Bachelor's of Science Degree in Secondary Education in Social Studies from University of Kansas. He lives in Framingham, MA with his wife and his black lab, Mia. View all posts by Ray Davis - The Affirmation Spot