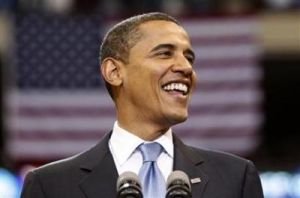 This morning all Americans can take pride in the fact that we have taken a step forward. The promise of the American political system has been, for the moment, realized.

With the apparent nomination of Democratic Senator Barack Obama for President of the United States, America has finally moved beyond a past filled with hypocrisy on such issues.

Change is a wonderful, positive thing. Promised, but unrealized, change can be very demoralizing. The American people (and the world) are eager for an American President to bring the former right now, but are understandably wary of more unfulfilled promises and false hopes.

So which kind of president would Barack Obama be?

He says the right things.

We are at an historic moment. For better or worse, Barack Obama stands at the center of that moment. What Barack Obama decides to do with his historic opportunity remains to be seen.

He swept through the primary season calling for change, change, and more change. Given the status quo on many topics, it’s not hard to see why people are clamoring for change.

Obama’s challenge is to demonstrate that his brand of change goes beyond WHO he is and translates to what he will DO. While his milestone victory is exciting, what he will do for this country is of much more lasting concern. Does he truly recognize the issues of the day and is he willing to transcend political orthodoxy to address them?

Among the questions Mr. Obama will have to answer:

These are REAL questions and the jury is clearly out on these and many more issues important to the American people.

The American people want a real change in direction and not just a change in the messenger. We want action not lip service on those changes. We want specifics not broad generalities.

The voters’ challenge, especially those who have helped create the Obama tsunami, is to test the level of change he truly represents. It is the American voters’ responsibility to demand substance and commitment to that change. “Better than McCain” is not an acceptable measure for our next leader. We have gone down that road before and we have found only disappointment.

Congratulations, Mr. Obama! Today you can take pride in your accomplishment and we in ours. Tomorrow the proving begins. Are you an agent for change or just the appearance of it? We are all looking forward to finding out.

10 thoughts on “Obama Nomination Fulfills American Dream – But Will He Live Up to Promised Change? – The Affirmation Spot for Wednesday June 4, 2008”